At Hackney, we always strive to deliver high quality digital services to our residents. To achieve that, we continuously review and seek to improve our development processes and practices.

Our API development is already enhanced by strong processes such as test driven development and API integration testing.

A new change in our processes is the quality assurance end-to-end testing using Cypress we have introduced as part of our software delivery lifecycle.

These are written using the Gherkin syntax which is a language utilised by the Cucumber test plugin. These are generally agreed with the rest of the development team and/or business stakeholder during refinement or planning sessions. They are written in a Given, When, Then format and represent a sequential flow of actions that should be performed. It is not necessary to follow the exact format as presented as part of the ACs, but rather use it as a guide from which to gain confidence that the correct amount of coverage around the feature(s) has been achieved.

We utilise the page object pattern to create a set of reusable page elements that we can then call within our steps file. They also may take environment context from an environment config file.

These are effectively the implementation of our tests, calling on the features and page objects to create our runnable test cases and generally follow the principles already outlined as part of the testing approach in our API playbook.

Our tests are triggered automatically after each deployment to a development, staging or production environment.

To achieve that, we configured our CI/CD pipeline to invoke a separate, independent end-to-end testing pipeline at the end of each environment deployment.

Any subsequent deployments depend on whether tests have successfully run against a given environment as the staging and production deployment pipelines only become available if the end-to-end tests have passed.

Benefits to this process:

The deployment flow goes as described below: 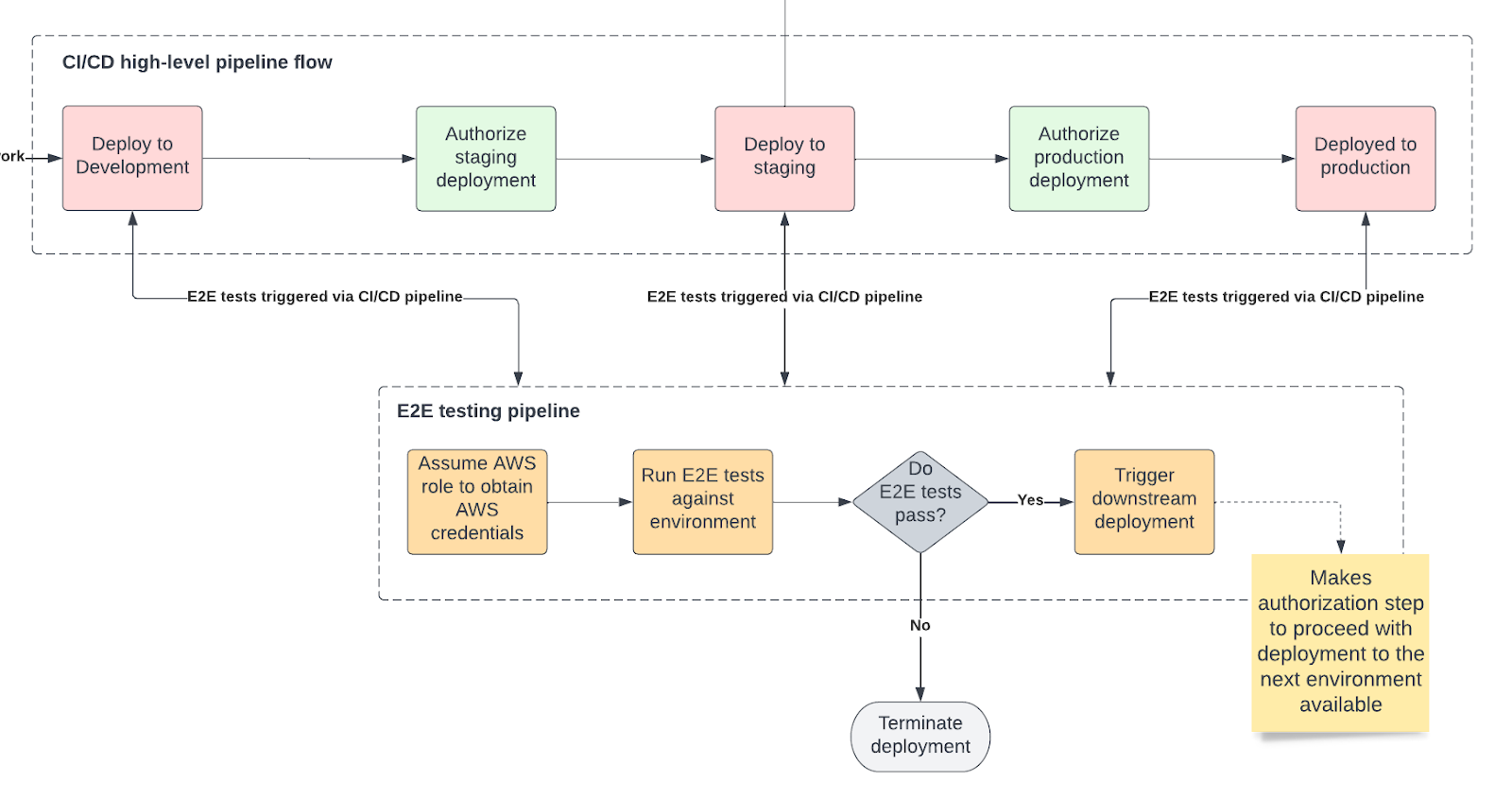 This was implemented with the use of CircleCI’s API.

QA engineers are still able to run their Cypress tests suite manually - this is particularly useful for running smoke tests against a production environment or tests of an individual feature only.

This has been achieved through the use of tags - our tests and feature files include tags, which group tests (for example accessibility tests) and give the engineers the flexibility to cherry pick what tests to run.

Another important part of our quality assurance process is performing manual exploratory testing - manually testing the system in the capacity of an end user.

Although end-to-end test automation is a great way to raise the confidence in a deployment and to check for bugs, manual exploratory testing can help uncover issues that could have been missed by the tests use cases.

Centralising our Cypress tests in a single repository, although they cover functionality delivered by multiple micro-frontends, stored in separate repositories, has helped us streamline and speed up the work of our QA engineers. Embedding the centralised tests into the deployment process of each individual frontend pipeline has removed the need to manually trigger tests and has provided additional assurance that deployments to staging and production environments would only happen if end-to-end tests are successfully passing.

We always strive to continuously improve our processes, so we didn’t stop here. Some other improvements to our assurance processes include introducing vulnerability and secrets scanning, infrastructure compliance testing and contract testing. We will be sharing more details about those soon.