Getting started with the local PySpark environment

Why develop PySpark scripts on your local machine?​

Prototyping your jobs on your local machine's IDE is the cheapest and quickest way to work. It has the following advantages:

Who is this tutorial for?​

People who need to prototype Glue jobs. If you just need to explore or analyse data on an ad-hoc basis, you should rather use a notebooking environment like Sagemaker.

You should be familiar with Python, Git, and the use of an IDE like PyCharm or VS Code. This guide uses PyCharm.

You don't need Data Platform access to use the local environment.

Set up instructions for Mac​

Check if you have Python3 installed by running python3 --version in your command prompt. If you do not have it, then go to https://www.python.org/downloads/ and install it.

Check if you have Git installed by running git --version in your command prompt. If you do not have it, then get it from https://git-scm.com/book/en/v2/Getting-Started-Installing-Git.

For the Data Platform code to run, you need at least the packages boto3, pytest, pyspark and pydeequ. You can install them now by typing in your command line: python3 -m pip install --user boto3 pytest pyspark pydeequ.

Alternatively, these libraries can be installed inside PyCharm as shown below.

We need these libraries to simulate the Glue environment. Go to the project GitHub page: https://github.com/awslabs/aws-glue-libs and download the code (Code > Download zip). Unzip it and leave it there. We will move it in other step later.

Install the project in PyCharm​

Alternatively, if you already have the project, pull the latest changes by running git pull in the PyCharm terminal window.

Set the Python interpreter for the project​

In this screen, set the python interpreter to the version you’ve installed. 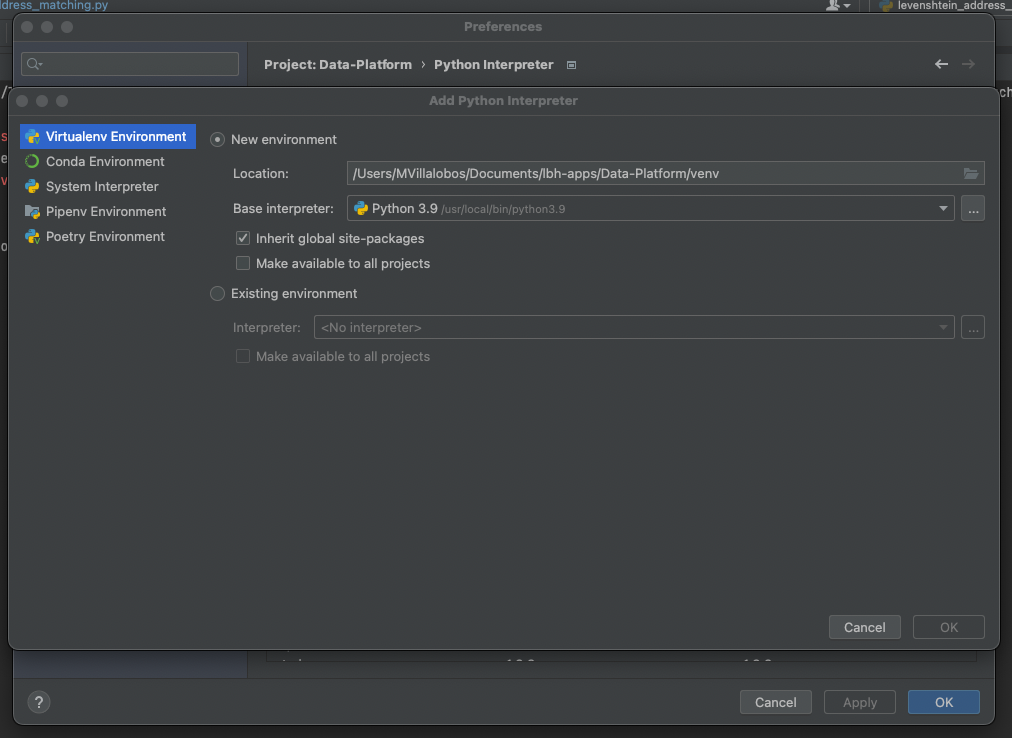 The following packages are necessary for unit tests. You can install them in the below window, or alternatively use pip install. 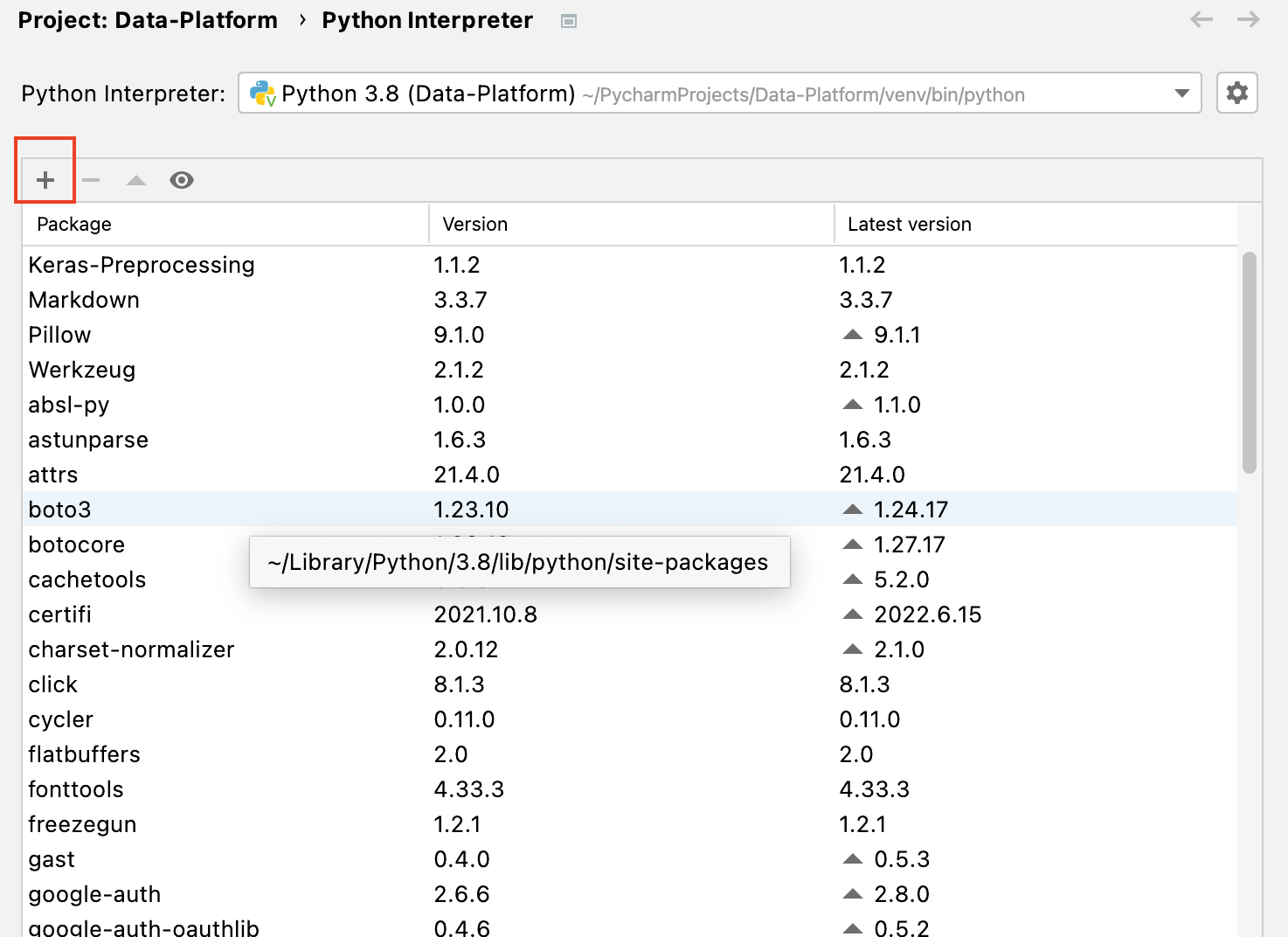 Import the Glue library as an external library​

If you have installed all the dependencies, the imports at the top of this script should all be fine.

If some imports are underlined, try to close and reopen PyCharm. If you still have problems, you can try to re-import the packages you installed via pip install within the DP environment, from the Python packages tab.

Set up instructions for Windows​

Install python from Windows store: it will set the right environment variables. After the install, the command python --version should return something.

NB: For some Windows OS, python installation from python.org also works fine. If you chose to install yourself, the Python command will be the normal py command.

This is specific to windows and will help us with paths etc. Download the full project from https://github.com/steveloughran/winutils/blob/master/hadoop-3.0.0/bin/. Unzip and locate the 2 files we need:

We will now place these files in different locations.

For the data platform we need at least:

If you have installed Python through Windows store, you must use the command python -m pip install …. If not, the normal command is py -m pip install ...

If this one fails and complains about a legacy install, it’s because it should rather be in the form of a wheel file. In this case, run the command python -m pip install wheel

NB: Alternatively, you can install Python libraries later in PyCharm at project level.

We need these libraries to simulate the Glue environment. Download them as a zip from https://github.com/awslabs/aws-glue-libs. Unzip them anywhere, you will move them later.

Install the project in PyCharm​

Alternatively, if you already have the project, pull the latest changes by running git pull in the PyCharm terminal window.

Set the Python interpreter for the project​

In file > settings, choose your project in the left panel and set the python interpreter to the version you’ve installed. Tick the ‘Inherit’ box but not the other box Close the settings window.

In the left panel, go to external libraries - site packages and paste the glue folder you’ve unzipped in the prerequisites step.

At this point, if you open the scripts/jobs/env-context.py script, you shouldn’t see any library highlighted in red.

If you open file>settings, you should see (after it loads) all the python libraries you’ve installed and are available for this project. Click the + button to install more. 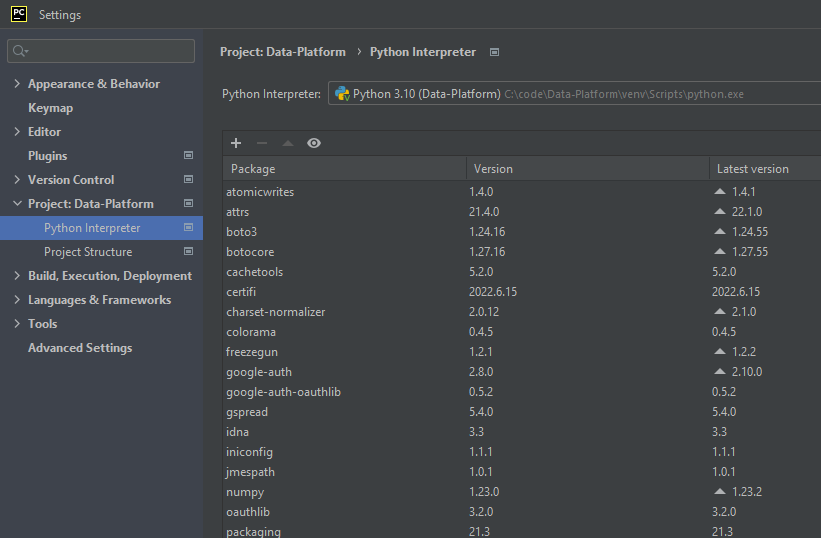 If you still have underlined imports, closing and reopening PyCharm may help, or even restarting your laptop.

When your installatin is complete, try to run a script by following the next section!

This is the first script that was converted for the local PySpark environment and can be considered as a model for other scripts.

You'll need some [sample data] (https://drive.google.com/file/d/1a18qvDoJPGavNjfLNvnrY_jOmVTTWhY7/view?usp=sharing) (downloadable by Hackney only): some source addresses to match, and some target addresses from the address gazetteer to match against. These 2 datasets are in Parquet format and should be saved with a folder structure mirroring S3.

Open the file scripts/jobs/levenshtein_address_matching.py. Check that the imports are fine. If you run the script now, you will get an error message because we haven’t specified the parameters. Do this from the Configuration window that you can open from the drop down list just right from the green Run arrow.

You can now run the job, see its progress in the console, and find the result file in the output folder.

If you are blocked with the Levenshtein address matching script, here is a minimal script that you can save as test.py (do not commit to the DP repository!). This creates a Spark data frame and then another one from a csv file. It is useful to troubleshoot basic issues.

Note for Windows users: the file paths inside the code need double backslash.

Running the unit tests of the Data Platform project is another way to test your configuration. To do this, navigate and right-click on the scripts/test folder. It gives you the option to modify the Run Configuration of this folder. Rename this configuration to 'Run all tests' and make sure the settings are as below. 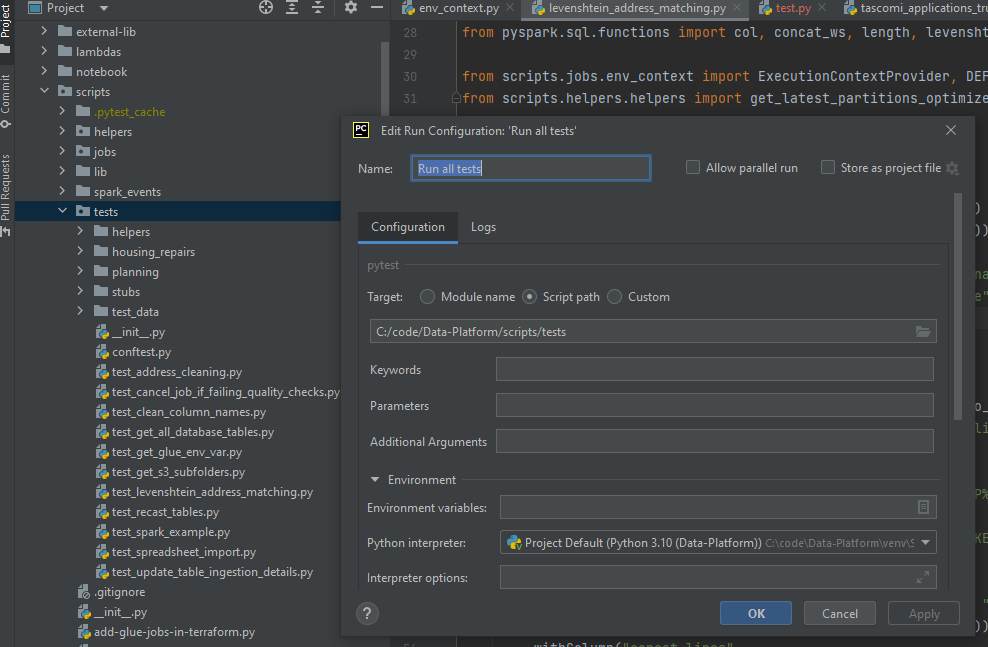 These are solutions to random problems related to the local environment.

Issue: After a system upgrade, scripts wouldn’t run in PyCharm because python.exe was not found.​

Solution: From the start menu, Launch ‘Manage Apps Execution aliases’ Make sure aliases for Python are on but not for the Python App installer. 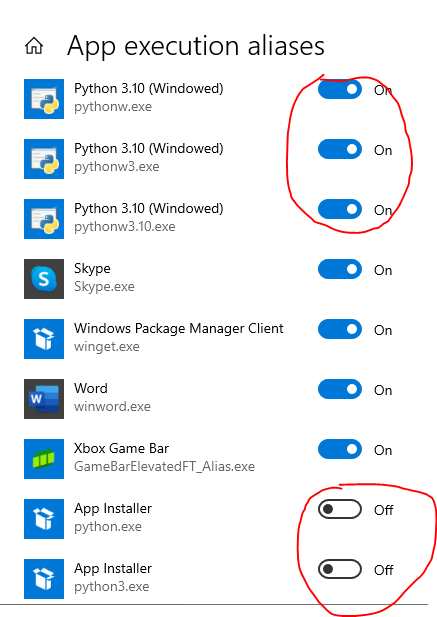 Issue: Various PySpark functions can no longer be found**: Mac​

Solution: Uninstall PySpark and reinstall. The latest version should generally be ok, but if in doubt reinstall the version you were using previously.

Solution: First of all open command prompt and enter where python. If there are mutiple paths then this means that there are multiple instances of Python installed which will be conflicting with each other. Identify the instance that you wish to use, and delete all traces of the version that is no longer required. You can verify this has been successful by running where python again and seeing how many paths are returned.

This may solve the issue above, and you should now be able to import packages as intended, using your Python environment set up for the specific project you are working on.

If the problem persists, then the next step is to try editing the Configuration for your local development environment by setting additional environment variables as in the screenshot below. This will instruct your PyCharm Python environment on where to look for Python. 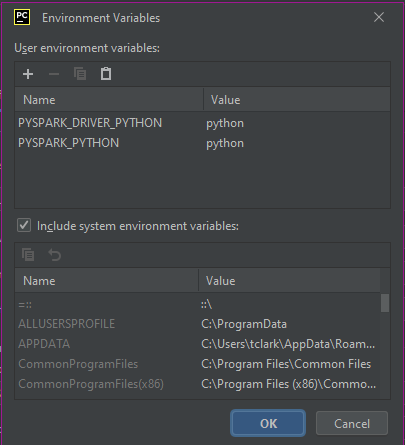